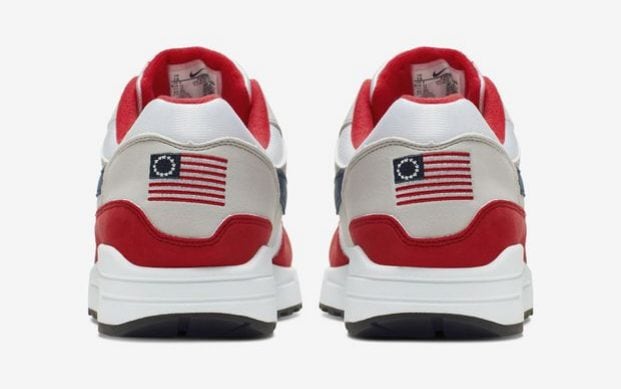 Nike has pulled a USA-themed trainer after NFL star Colin Kaepernick reportedly complained that the old version of the American flag on them was offensive given its links to white supremacists.

Colin Kaepernick, the American football player famous for leading protests during the playing of the US national anthem and who fronted a Nike advertising campaign, is said to have complained because of the flag’s association to nationalists. Kaepernick, 31, drew worldwide attention when he began kneeling on the field during the national anthem in 2016 to draw attention to social injustice and racial inequality. He has since gone unsigned by NFL teams.

The version of the US flag that appeared at the back of the new shoes, which has 13 white stars rather than the 50 on the modern version, was used in the United States from 1777 to 1795.

Kaepernick’s alleged intervention was first reported by the Wall Street Journal, which said he had told the company not to sell the shoes as the symbol was offensive.

A Nike spokesman confirmed the shoes had been pulled: “Nike has chosen not to release the Air Max 1 Quick Strike Fourth of July as it featured the old version of the American flag.” the company for calling back shoes that had been brought out to celebrate America’s Independence Day on July 4.

The decision triggered a backlash from some conservative politicians who criticized the company for calling back shoes that had been brought out to celebrate America’s Independence Day on July 4.

Doug Ducey, the Republican governor of Arizona, ordered the withdrawal of “all financial incentive dollars” the state was due to give Nike for opening a manufacturing plant near Phoenix.

“Words cannot express my disappointment at this terrible decision. I am embarrassed for Nike,” Mr Ducey tweeted, calling the decision a “shameful retreat”.

Ted Cruz, the Republican senator for Texas who sought his party’s presidential nomination in 2016, said: “It’s a good thing Nike only wants to sell sneakers to people who hate the American flag.”

The protest movement drew criticism from some conservatives including Donald Trump, while others praised his courage.

Kaepernick has since become the face of a Nike advertising campaign which talked about the willingness to sacrifice for success.

Nike has not commented directly on whether Kaepernick played a role in the trainers being pulled. The shoe was set to be released Monday for $140.00. It is unclear if any of the shoes were sold.