Mitch “Smashin’ Frog” Aguiar is a former Navy SEAL who livees in Virginia. After hearing rumors about a protest planned to target a memorial in Virginia Beach, he took action.

Virginia is an open carry state, so Mitch armed him self legally, and went to ensure the memorial to the fallen SEALs remained untouched. He tells us, “I thought I was going to be out there by myself. However, I was pleasantly surprised to find some old salty frogs there. They were also ready to defend the monument. We even had an overwatch team on the surrounding hotel balconies.” He went on to say, “We were also monitoring police scanners for updates on the situation.”

Previous demonstrations on the oceanfront had turned violent. Protestors had vandalized and looted stores. Subsequently, causing police to use tear gas and other less than lethal tactics to disperse the crowd.

Mitch tells us, “Apparently one of their objectives was to vandalize/destroy the Police Monument and the Navy SEAL Monument, both are memorials to fallen heroes.”

Furthermore, he tells us, “We were going to make damn sure that wasn’t going to happen! The police had come down and saw we had a handle on things at the SEAL Monument. This freed up officers and allowed them to deal with and contain the bulk of the protesters down the boardwalk.”

Mitch stated he believed this show of force was a necessary deterrent. He also said, “There were two shootings down were the bulk of them were but nothing major at the monument. So overall it went well and there was no drama.”

Dedicated on July 20, 2017, this has stood as a honored ground for Veterans and civilians alike. They come from all over to remember the fallen and reflect on the call to service. In the past, SEAL monuments, such as one dedicated to Lt. Michael Murphy, have also been vandalized.

His instagram post of the evening has gathered over 21,000 likes. His post was also shared by Rob O’Neill, who is largely credited for killing Osama bin Laden.

A public monument honoring Navy SEALs was long overdue, until the Museum created one on the Virginia Beach Boardwalk.

Although a great number of SEAL forerunners trained in Ft. Pierce during World War Two starting in 1943, the earliest SEAL predecessors came together in Virginia Beach in 1942. These volunteers for special missions distinguished themselves in combat during Operation TORCH in North Africa later that year. Over time, the SEAL Museum and then other major SEAL heritage sites erected identical Naked Warrior statues to honor their Frogmen, leaving Virginia Beach as the sole SEAL heritage site with no SEAL marker for the general public.

This situation was put right on July 20, 2017 when the Virginia Beach Navy SEAL Monument was dedicated. Visually striking and loaded with layers of significance, it is a compelling tribute to SEALs and their antecedents. The Monument stands on the Boardwalk facing the Atlantic Ocean at 38th Street, a scenic and dignified public place frequented by locals and visitors alike.

The Monument’s centerpiece is the same iconic Naked Warrior statue as at the Museum and the two other major SEAL heritage sites. A timeless symbol of all SEAL history, it depicts a WWII Underwater Demolition Team swimmer atop a beach obstacle, facing the ocean, gathering himself to conduct a combat mission. He is life-size, denoting that the SEAL reputation was made not by supermen, but by ordinary men who do extraordinary things for their country. The Naked Warrior stands within smooth black granite walls laser-etched with concise words and 100 photographs illustrating the entire history of SEALs and their forerunners. Around the base of the statue is a Living Beach composed of continually replenished sand from over 80 places around the world significant to SEAL history.

Engraved on the walls are gold Medals of Honor for every SEAL who earned one, and gold stars for every SEAL – and a gold paw print for every SEAL war dog – killed in the line of duty. Above the Monument fly the American and SEAL flags. A strong, waterproof time capsule is embedded securely within the Monument, to be opened in 2067.

Navy SEAL statues mirror each other across country 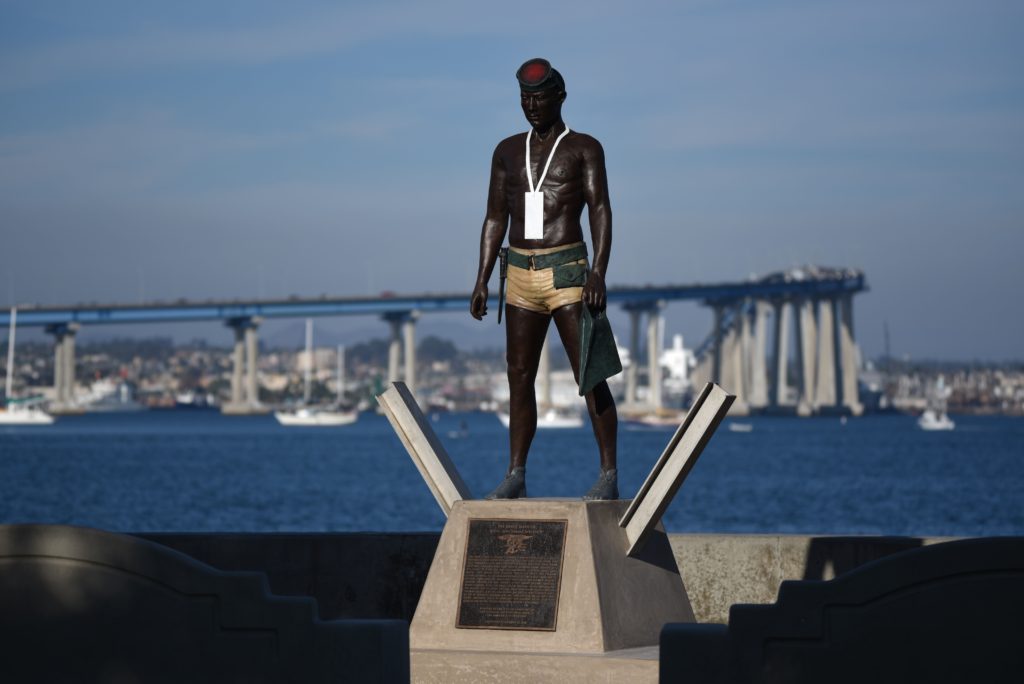 BROOKHAVEN, Long Island (WABC) — A 14-year-old was arrested after a memorial honoring a hero Navy SEAL from Long Island was destroyed.

“For conspicuous gallantry and intrepidity at the risk of his life and above and beyond the call of duty as the leader of a special reconnaissance element with Naval Special Warfare task unit Afghanistan on 27 and 28 June 2005.
While leading a mission to locate a high-level anti-coalition militia leader, Lieutenant Murphy demonstrated extraordinary heroism in the face of grave danger in the vicinity of Asadabad, Kunar Province, Afghanistan. On 28 June 2005, operating in an extremely rugged enemy-controlled area, Lieutenant Murphy’s team was discovered by anti-coalition militia sympathizers, who revealed their position to Taliban fighters. As a result, between 30 and 40 enemy fighters besieged his four member team.

Demonstrating exceptional resolve, Lieutenant Murphy valiantly led his men in engaging the large enemy force. The ensuing fierce firefight resulted in numerous enemy casualties, as well as the wounding of all four members of the team. Ignoring his own wounds and demonstrating exceptional composure, Lieutenant Murphy continued to lead and encourage his men. When the primary communicator fell mortally wounded, Lieutenant Murphy repeatedly attempted to call for assistance for his beleaguered teammates. Realizing the impossibility of communicating in the extreme terrain, and in the face of almost certain death, he fought his way into open terrain to gain a better position to transmit a call. This deliberate, heroic act deprived him of cover, exposing him to direct enemy fire. Finally achieving contact with his headquarters, Lieutenant Murphy maintained his exposed position while he provided his location and requested immediate support for his team. In his final act of bravery, he continued to engage the enemy until he was mortally wounded, gallantly giving his life for his country and for the cause of freedom. By his selfless leadership, Lieutenant Murphy reflected great credit upon himself and upheld the highest traditions of the United States Naval Service”

Authorities said the suspect was arrested at his Ronkonkoma home early Friday morning on charges of criminal mischief. He is scheduled to be arraigned at Family Court on a later date.

Murphy was awarded the U.S. military’s highest decoration for his heroic actions during the war in Afghanistan.

Murphy’s father says he doesn’t believe the vandal understands the significance of his actions.

“Unfortunately the stonework isn’t here anymore, but if you look at one of the places where he struck Michael was right at the heart, which is like striking at the heart of America,” Daniel Murphy said. “Michael was the type of person who would have wanted to take that man under his wing and talk to him.”

Murphy’s mother said she hopes someone speaks to the boy about what Lt. Murphy and his team of SEALS did for the country. She would like the child to read the book “Lone Survivor” which is about her son’s mission. The book was made into a movie starring Mark Wahlberg.

“I lost Mike and then when I saw that I felt like I lost him again because, you know, I was proud to come down and see this,” Maureen Murphy said.

“Lieutenant Michael Murphy served our nation with extraordinary courage, valor and dignity, and we are all indebted to him and his family for his sacrifice. He was a Smithtown native who was awarded the Congressional Medal of Honor, the military’s highest decoration, for his actions in Afghanistan during Operation Red Wings on June 28, 2005, the first member of the Navy to be awarded the Medal of Honor since the Vietnam War. This most-esteemed award memorializes and honors his leadership and service, and to desecrate this honor is beyond the pale.

“I am appalled and disgusted by this apparent act of vandalism. The State of New York will fully fund the replacement of the plaque, and I hope this brings comfort to his family and community. The people of this state and this nation owe Lieutenant Murphy a debt of gratitude, and I personally thank him for his service.”

The Murphy family said they would be willing to meet with the boy.

A new plaque is already being made. New York State as well as Suffolk County and the Town of Brookhaven have all offered to pay for the replacement. The town said it has received so many donations from private citizens that it needs to figure out who will make the final payment.

A local company has also offered to put in free surveillance cameras to monitor the site moving forward. The town hopes to have the cameras installed by the end of the month.

Lt. Michael P. Murphy Memorial Park in Lake Ronkonkoma was dedicated in his memory on July 7, 2006, on what would have been his 30th birthday.